In common use in the English language meaning something deliberately misleading.

Why a herring  to illustrate this? Never given it much thought until now. This meanings lost in time feature is uncovering lots of things: They aren’t red for a start and that seems to be an essential ingredient so I searched:

It originates from a time when people called

highwaymen were lurking in the shadows of the forests, waiting to hold-up  passing coaches to demand all the valuables or else.

‘Your money or your life.’ Was a saying they minted in early eighteenth century England and the most famous highwayman was Dick Turpin.

A real person who plagued travellers in the days before trains. A folk hero now but probably not at the time. I can think of lots of other ways he might have been described, some of the adjectives used, no longer than four letters.

Apparently he always kept a smoked herring handy (red in colour) on the end of a long piece of string. I’ll get to that later.

On horseback of course and when he’d stopped the coach and loosed off one of his pistols to show that he meant business and to scare their pants off, he’d get one of the passengers to gather all the jewellery and coin, bank notes and any other valuables into one or two of his saddle bags.

Then he’d order them to take their clothes off. This was a very effective way of slowing down a pursuit and a trademark that attracted more of those four letter words I was telling you about.

Having chosen the heist location carefully he then rode off fast until he was well out of sight, took out his red herring and trailed it behind him.

Smoked, they are very aromatic, called kippers in the UK and dogs love stinky things as we all know – dog’s heaven might smell of red herrings. 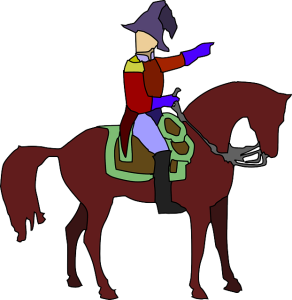 Dick would then take that well used ruse of stepping the horse into a waterway, something like a stream (not too deep), to throw the dogs off the scent when the time came for law enforcement to track him down. They knew he had a hide-away in the forest somewhere.

Slippery Dick gave the bank of the stream a good smearing of kipper before trotting a hundred yards or so in the opposite direction to the one he intended to take (careful to stay in the water) before another smearing of fish on that bank and then hurling the fish into a dense thicket or some thorny scrub. Or some other no-go area for dogs – cliffs and marshland were good.

After all this attention to detail he’d double back and continue for a few hundred more yards, following the course of the stream before heading for his lair and a well earned rest. Smoke his pipe maybe before a fish dinner, followed by an alcoholic drink or two with his mates comparing robberies.

Come back next Friday

For other meanings check out the sidebar at the top

I'm an indie author ardently writing fiction and you’ll notice a leaning towards Egypt. The book in the cooker right now is called The River Through. Hatsepsut features strong as an ancient enigma bringing her people back to pure after a sullying occupation by the Hyksos. I like these desert ancestors who dragged great chunks of stone for miles to build runways for god. Religion was a major preoccupation always. Magic was mixed in, sometimes called miracles. Christian and Hebrew testaments carried it over. Egyptians weren’t bothered with a history list based on sequential record keeping so there are numerous and bewildering gaps. A definite plus for the fiction writer. (Colouring in the spaces.) Bio: I am very tall and many people call me a freak (and laugh) so a slight chip on the shoulder but thick skinned - not impervious. Lots of short people out there who aren’t pleased to be little too. Given the choice, I’d keep length. Upbringing I am thankful because, during my life I have found many people who weren't so blessed so thanks mum and dad for pulling me out of the lucky dip. Two sisters and a brother, all of them cleverer than me or so they think. A wife who loves me - thanks Gill xxxx Two daughters, a yoga teacher and a nurse who don't quite hate me but we are moving in that direction as I tread heavier with advice. Lovely grandchildren who will develop into super beings if they maintain the current progress. A cat called Squeezely who has finally learned to evacuate his bowels outside. Buster the darling dog with a sensitive way and an over-exuberance for affection but we all let him take us down for licking. He's big. Occupation: Education first: Good military school that chased out the bad in me I can tell you. No-one put a polish on a boot better but it was enjoyable in retrospect. Not at the time though. Art college next and enlightenment - the world was a better place afterwards. Self employed antique furniture and restoration - very enjoyable and fulfilling but not overflowing financially. We did okay and we prospered.
View all posts by garth →
Image | This entry was posted in Meanings Lost in Time and tagged amazing, blogging 101 alumni, blogging101, history, idioms and sayings, interesting, meanings lost in time, writing. Bookmark the permalink.

2 Responses to Meanings Lost in Time #4

You have found a site of a growing collection of poetry, short stories -both fiction and non-fiction that come from the depths of my being. For me, there is no other reason to put words on paper.

Simple Stories to reach a community

Our lives are a Christ-like fragrance rising up to God...2 Corinthians 2:15

Minding other people’s language. A lot.

I'm Michelle. This is my blog. I write about women and fatness, expound upon semi-coherent thoughts I have in the middle of the night, and offer tough love to those in whom I am disappointed; they are legion.

A blog full of humorous and poignant observations.

WITHIN ARE PIECES OF ME

Books, movies and everything in between