“Cat got your tongue?” 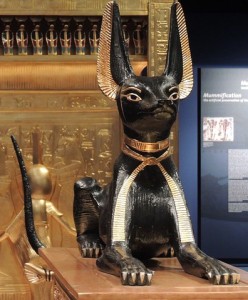 This is a curious saying now disappearing from common use. Posed as a query to someone faltering on a reply to a pointed question or accusation.

It’s old – dating back thousands of years to the ancient Egyptians and the Temple of Bastet, the cat goddess. Does it send a shiver down your spine as your imagination gets going?

Well, rightly so because, from fragments of  information gathered from a variety of sources (and I will admit to a few gaps) I’ve uncovered a horror story.

Search the internet and find the popular explanation as having a connection to the cat o’ nine tails. That wicked whip used to keep sailors in line as an example to the rest of the crew.

Doesn’t compute though does it? The only similarities are two different cats. Do you see a tongue anywhere? Neither do I but the Egyptian description pins it down. Rather nastily I’m afraid:

Long ago in the land of the Nile, the punishment for blasphemy or lying was to have your tongue put out just before dawn.

Knowing a special treat was coming their way the temple cats would gather and when the eye of Ra opened (the sun at dawn) down went the offering (finely chopped probably) to be gobbled up by the Sun-God’s agents of rage and retribution.

Fits together quite convincingly as the more likely explanation.

Next week: Another saying from Egypt, much, much older than the one above. In common use all over the world but very few people are aware of its origins. I won’t give you a preview because you’ll look it up on google so come back next Friday for something that will touch your heart with its exquisite beauty.

If you missed last week’s saying go here for another meaning lost in time.

Lots of pesky critters in Egypt: Scorpions, big spiders, snakes, rodents, you name it but none would venture into a place with a resident cat so they were highly valued and elevated to divine status in appreciation of their service to humanity.

I'm an indie author ardently writing fiction and you’ll notice a leaning towards Egypt. The book in the cooker right now is called The River Through. Hatsepsut features strong as an ancient enigma bringing her people back to pure after a sullying occupation by the Hyksos. I like these desert ancestors who dragged great chunks of stone for miles to build runways for god. Religion was a major preoccupation always. Magic was mixed in, sometimes called miracles. Christian and Hebrew testaments carried it over. Egyptians weren’t bothered with a history list based on sequential record keeping so there are numerous and bewildering gaps. A definite plus for the fiction writer. (Colouring in the spaces.) Bio: I am very tall and many people call me a freak (and laugh) so a slight chip on the shoulder but thick skinned - not impervious. Lots of short people out there who aren’t pleased to be little too. Given the choice, I’d keep length. Upbringing I am thankful because, during my life I have found many people who weren't so blessed so thanks mum and dad for pulling me out of the lucky dip. Two sisters and a brother, all of them cleverer than me or so they think. A wife who loves me - thanks Gill xxxx Two daughters, a yoga teacher and a nurse who don't quite hate me but we are moving in that direction as I tread heavier with advice. Lovely grandchildren who will develop into super beings if they maintain the current progress. A cat called Squeezely who has finally learned to evacuate his bowels outside. Buster the darling dog with a sensitive way and an over-exuberance for affection but we all let him take us down for licking. He's big. Occupation: Education first: Good military school that chased out the bad in me I can tell you. No-one put a polish on a boot better but it was enjoyable in retrospect. Not at the time though. Art college next and enlightenment - the world was a better place afterwards. Self employed antique furniture and restoration - very enjoyable and fulfilling but not overflowing financially. We did okay and we prospered.
View all posts by garth →
This entry was posted in egypt, Meanings Lost in Time and tagged amazing, blogging 101 alumni, cats, egypt, english language, epitaph, extraordinary, idioms and sayings, meanings lost in time, revelation, writing. Bookmark the permalink.

3 Responses to Meanings Lost in Time #2

You have found a site of a growing collection of poetry, short stories -both fiction and non-fiction that come from the depths of my being. For me, there is no other reason to put words on paper.

Simple Stories to reach a community

Our lives are a Christ-like fragrance rising up to God...2 Corinthians 2:15

Minding other people’s language. A lot.

I'm Michelle. This is my blog. I write about women and fatness, expound upon semi-coherent thoughts I have in the middle of the night, and offer tough love to those in whom I am disappointed; they are legion.

A blog full of humorous and poignant observations.

WITHIN ARE PIECES OF ME

Books, movies and everything in between